﻿
I should not be telling these tales, but you need to know that I was with a band of scurvy pirates, who, on three days past, sailed their ship up into the mouth of the Hillsboro Bay and landed on the banks of the Town of Tampa, a city known for its easy spoils.  Indeed, this town is such an easy mark, we’ve come calling many times.

After our ship landed, we marched straight into the town; along a road the local inhabitants call “Bayshore Boulevard”, which borders the bay.  Such a foolhardy design for a road, I must say, without a wall for protection.  It leaves the town with no defenses.

As we begin our march, the townspeople line the street, cowering in fear; merely watching and taking no action to stop our invasion.  Oddly, these people seem to revel in the defenseless position in which they find themselves.

The young wenches are especially easy in this town and have been known to do naughty things for mere trinkets, such as a string of pearls, and they care not that these necklaces bear the label, “Made in China”.

As we enter the town, there is a festive atmosphere, as the townspeople break out the grog and food, aplenty.  And the wenches and their envious men abandon their reticence and join us in our victory celebration. 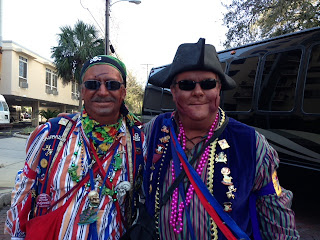 I wrote the post for the Week 62 Trifecta Writing Challenge where we are to write a 33-333 word composition using the word “mouth” in the context of something that resembles a mouth, such as where a stream enters a body of water.


I described an actual event which took place last Saturday, which is the Annual Gasparilla invasion, a tradition in Tampa which began in 1904, when a group of men dressed as pirates invaded the city on horseback.  The story goes that these men were bored and were looking for an excuse for a party.  Today, we have a “real” pirate ship made from a barge and about 200,000 to 300,000 people come to see the parade.


And yes, we are standing in front of a SUV, not our pirate ship.

The bed moaned under our weight and my screaming alarm clock radio began to spit out useless information. Suddenly, the door yawned and my clever dog, Raton, strolled in to assess the commotion.
________


I wrote this for the Week 52 Trifextra Writing Challenge where we are to write 33 words using personification, where human traits and characteristics are given to animals and inanimate objects.

Who's the Smart One?

I am writing this post for the Trifextra Week 51 Writing Challenge where we are to write exactly 33 words inspired by one of three pictures.  I chose the picture below.


Look at those people down there.  I'll bet thousands of them are desparately trying to find a bathroom, but they're all locked up in the City. Dumbasses!  I can take a dump anywhere!

Brotherhood of the Disappearing Pants

Michele and Mel have put up a new Ketchup With Us (#10) prompt which requires that we tell you, in 57 words or less, who or what we go head to head with every day.

As I real estate development lawyer, I go head to head with government staff people who, basically, would rather that my clients’ shopping center or apartment complex not be built (hey, you’ve got to shop and live somewhere, right?).  This would be the obvious choice for my response, but, no, this would be tedious and boring. So, instead, I decided to write about an every day, mundane, but extremely frustrating, challenge.


But, before I unveil this little piece of writing, I must say that Michele and Mel almost stole whatever little mojo I have. First, they had the audacity to name me the “Featured Writer” for this prompt, then, to add insult to injury, they pointed out that my piece for the last prompt was “hilarious”.  Needless to say, I was immobilized with fear, like the guy who forgot his Viagra (not me, I swear). So, after scrapping, at least, 56 of my original 57 words, here goes:


It’s a mystery: I can’t find that agreement on my desk under mounds of paper. Or my pants in a pile on my bedroom chair. Maybe, it’s because I mindlessly toss the agreements and pants and they disappear in the vast wilderness of my life. But, I protest: “I’m an organized person.” My inner voice responds, “Bullshit.”

It was my intention to sit out this week’s Trifecta Writing Challenge, since I was actually busy with work and I got a little preoccupied with fooling around on Twitter. I signed up on Twitter a couple of weeks ago, not really having any idea what it was about.  But I saw that a lot of other bloggers were on there and I thought it might be a good way to shamelessly promote my blog and my son’s short film, “All You Can Eat”, which will be shown at the Slamdance Film Festival in Park City, Utah on January 19th and 21st.


So anyway, while I’m still not sure what I’m supposed to do on Twitter, I’ve been reading a lot of tweets and I, sort of, get what people are doing.  Maybe it’s my upbringing, but I still hesitate to respond to people’s tweets who I don’t know, as I feel like I’m interrupting someone’s private conversation. I know this is ludicrous, since people put this stuff out there for the world to see, right?


But I also see that tweeting is somewhat addictive and I’ve noticed a lot of bloggers have offered New Year’s resolutions to the effect of: “I will spend less time on Twitter.”  So, before I get into any bad habits, I resolve to not spend too much time on Twitter and I absolutely will not go on Twitter if it cuts into time I could be spending with people in my life who I really care about (corollary: I also resolve to not let work interfere with my blogging and tweeting).

Now, if anybody has any input for me as a newbie tweeter, please comment here or on Twitter.  My handle (is that the right word?) is @lumdog2012.


I wrote this post for the Week 59 Trifecta Writing Challenge where we are supposed to write a 33-333 word composition using the word, “intention”, in the context of what one intends to do or bring about.

Rocky flow
Carries the mantle
Of a space
With no escape

I wrote this for the Week 49 Trifextra Writing Challenge where we are to write exactly 33 words about the earth's layers.

Mel and Michele invited us to link up and tell the world about our New Year’s resolutions that are likely to be broken.  I started writing about one resolution and for some strange reason, I found that I have three resolutions which are inextricably tied to one another. Here goes, but, I swear, I mean to keep these resolutions, at least, until this gets posted.
___________


Improve attention span (I’m sure there are some mental exercises I can find on Google to help me with this, except I found this interesting site which...oh yeah, the exercises)


Stop procrastinating (yeah, right after I look up those exercises on Google)

It Only Takes the Proper Diagnosis

Dr. Freundly:  “How long have you been having anxiety and depression?”


Dr. F:  “Can you tell me what changes occurred in your life about this time?


E:  “I don’t think anything unusual happened.  Oh, wait…I started writing a blog then.  But what does that have to do with anything?”


E:  "But, wait a second, my writing has been a release for me.  It allows me to, sort of, unload my frustrations.  You can write things that you normally can’t say to people directly.”


E:  “I wrote that I was, sort of, upset that she had hung out with my brother.”


E:  “Well…I found out they went to bed together.”


E:   “No, they were doing it the whole time I’ve been dating her. And she’s been flaunting it all over town.”


Dr. F:  “I still am not seeing the cause for anxiety and depression.  Perhaps you could tell me exactly what you wrote in your blog.”


E:  “Well…I wrote that if I caught them again, I would set them on fire and hack their bodies into little pieces.”


Dr. F:  “See, this what I meant about writers having higher rates of mental illness. Don’t you see?  Your writing has caused all these problems. It’s just so unhealthy. You need to stop writing and just learn to relax a little. I can prescribe something if you like. Believe me, you will survive.  Same time next week?”

I wrote this for the Week 58 Trifecta Writing Challenge where we are required to write a 33-333 word composition using the word “survive” in the context of continuing to function after facing a hardship.


Thanks to Steph for inspiring me to use the psychiatrist’s couch as a vehicle for this story with her excellent piece, “Salacious”.
Your comments are apprciated.